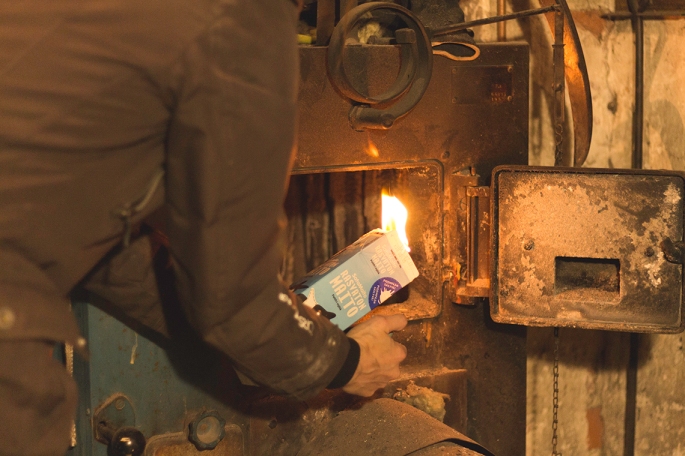 Hello darlings! I just looked at the time and it’s incredible how quickly the hours just fly ahead when I’m consumed in a task. When I got up this morning our house was so cold because we were lazy this weekend and didn’t keep an eye on the wood burner. Last night Jay went to check it and confirmed the fire had gone out some time ago, and flipped the switch to heat up our water with electricity instead. We are lucky we aren’t in the dead of winter with twenty below zero. While it’s still on the plus side, although only a few degrees, it seems the water stays warm for longer, even after the fire has gone out.

Using electricity is something I find so wasteful when we have our own wood to burn, but I am also grateful we have that option — as much as it’s not meant as backup for our laziness. However it’s very useful on those harshest and most painfully cold days since burning wood simply isn’t enough. Of course, I am completely okay with putting on an extra layer of clothes, but not having the luxury of warm water on those days isn’t so nice. That said, we haven’t had a winter like that for a long, long time now.

As soon as the darkness lifted, I got dressed in my work clothes and went outside to deal with the fire. I really don’t like going out there when it’s till dark, at least not up on the loft. There are so many deep corners up there and the slightest wind whistles eerily through the old wood. I’m a grown woman but still afraid of the dark and so easily spooked it’s ridiculous. Some nights I have to wrap the bed cover around my legs — I have this strange fear of something touching my feet. I’ve read and heard that I’m not alone in that, though. Do any of you have fears like that?

The first thing I do when I get out there is fill up the container with wood chips. If the fire has gone out, I have to turn the feed off before or it will push wood into the burner, which fills up and gets clogged without a fire. It is only now that I am getting the hang of all the things involved in this. The amount of times Jay has had to answer the same questions! 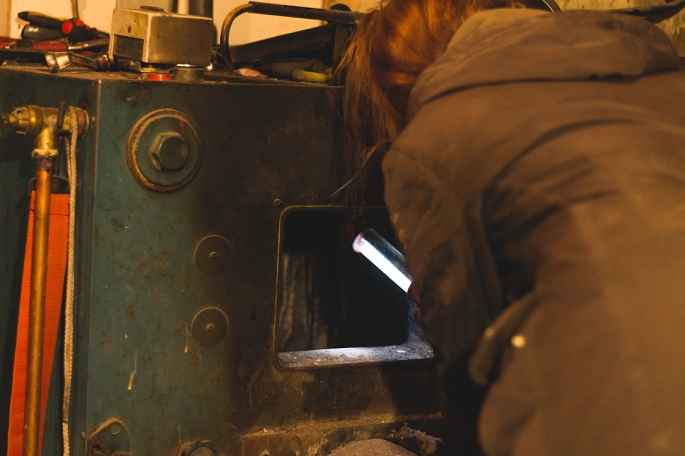 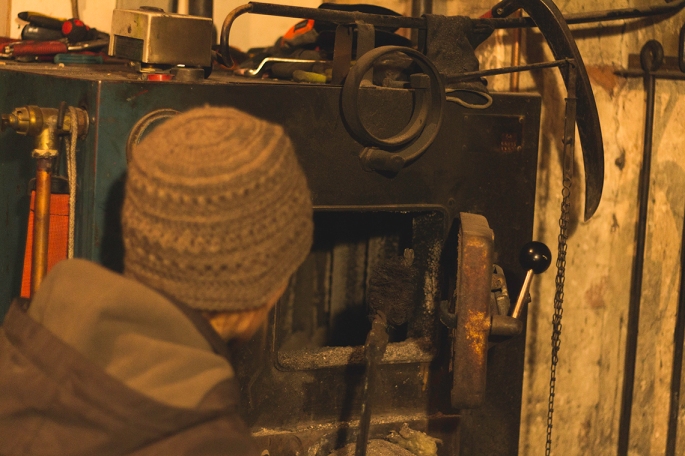 I think the fire went out before we ran out of wood because the burner chamber was full of wood chips and big charred/melted lumps. I have no idea what happened, but I spent the longest time cleaning before I could even get started on building the fire. I had to reach in there with my hands and dig it all out. 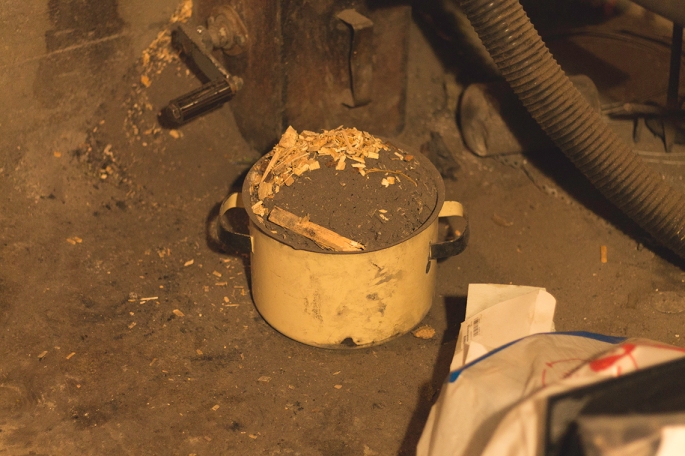 The actual fire is in the end part of the pipe which feeds wood, and not inside the burner chamber. Took me some time before I understood this. Air also blows through this pipe, so before the fire is alive and steady, I have to disable the screw, otherwise it will just push whatever little glowing embers have ignited out into the burner chamber. And then I have to start all over. 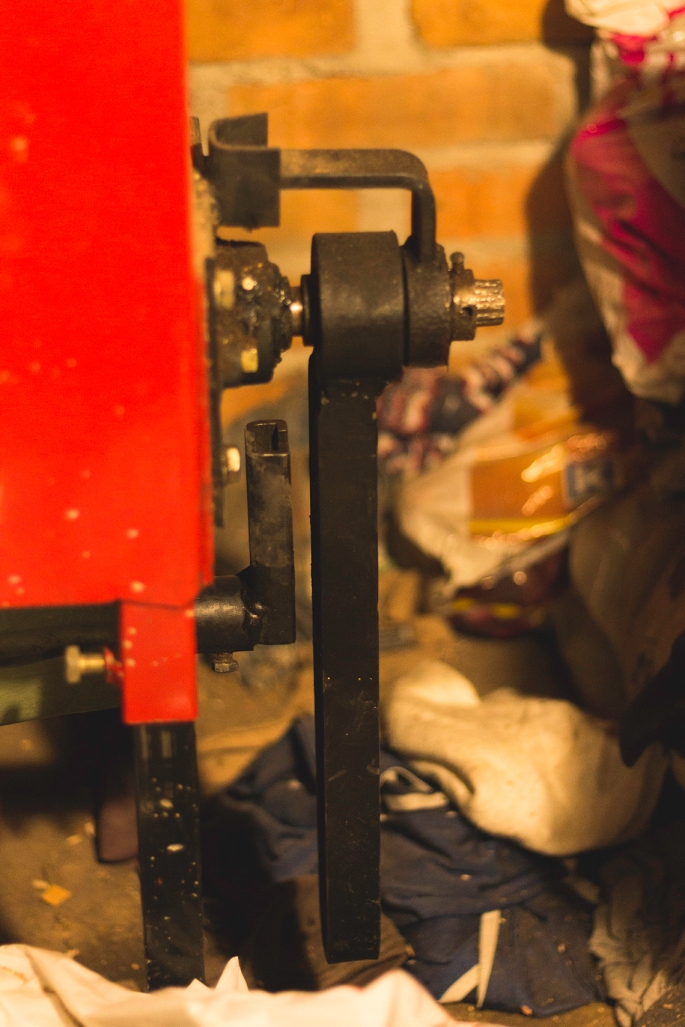 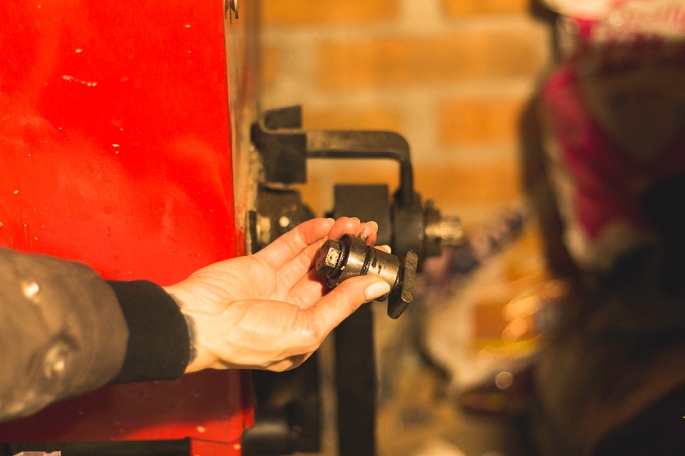 I gave up trying to find the appropriate names for these parts. In the first image are the two levers — one connected to the screw and one to the engine that drives it around. That bolt (or whatever it’s called) in the second image has a ball bearing inside it (I think). It keeps the two levers connected, and before the fire burns, it has to be removed so that the engine (or compressor?) only blows air through the feed pipe. Jay was in charge of this at first, but now that I can do it, I have to be the one to tighten this bolt, otherwise I can’t get it back off. He tightens it way too much. For my strength, at least, haha. 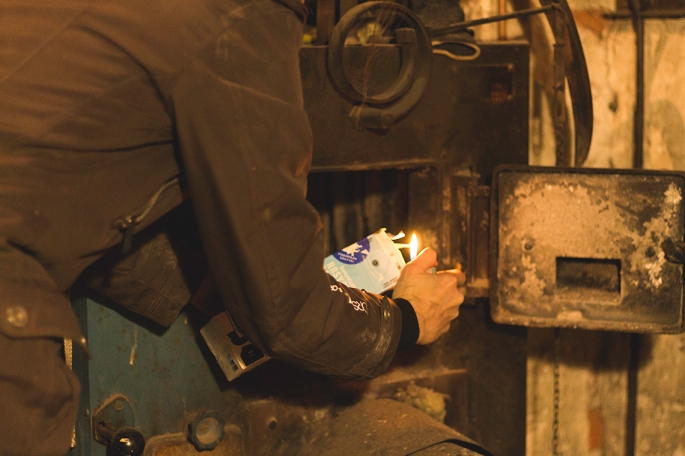 We collect all burnable things from the household rubbish and use it for kindling. These milk cartons are perfect since I just open it up and fill it with paper and carton and whatever else, then light it up. After that I put it into the end of the feed pipe, where there has to be wood chips. Then I just wait until the wood a little further in is burning. This looks really cool. Like hundreds of tiny, tiny fireflies soaring out from the pipe and into the wood burner chamber. I tried to get a photo of it, but I wasn’t willing to risk the health of my camera. 😉 I did manage to catch a few flying dots of fire, though! 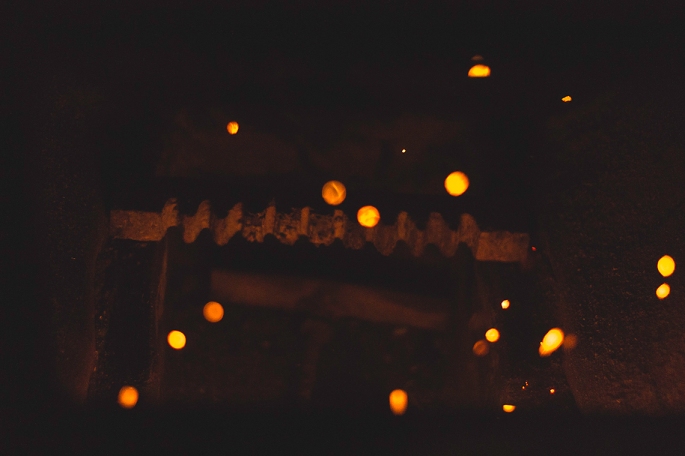 So that was my morning. I think I spent almost two hours out there, and another couple of hours, almost, getting this written because I do not possess the skill of multitasking. The editing took no time at all. I barely did anything with them, and I think it’s thanks to my yummy (it is a good word!) new lens! ❤

Now I will wish you all a wonderful week. I hope it brings many good things your way. I also want to thank you for all the lovely words you leave me, they really make me so happy and I love reading them. I will sit down and answer your comments a little later today. I’ll see you soon!