Good evening, everyone! As of right now, I am snuggled up on my father’s sofa with a cup of coffee and my laptop. I just finished editing some photos from today’s road trip to Junsele–a smallish town about 130 kilometers from where my father lives. I went there with Lilli and my brother to have a look at an art exhibition by Jonna Jinton, and I have been writing and erasing several times over now to tell you about it. I’m laughing because I feel like a sloth trying to run–gracefully–on a tightrope. Haha So I am deciding to tell you about it later.

On the way up to Junsele, however, we decided that if the rain let up, we would stop at Näsåker on our way back, another small town where next to Nämforsen (a river), there are petroglyphs dated all the way back from the Neolithic Age to the Bronze Age. I can’t actually find any information that it would be a UNESCO World Heritage site, but since it sort of is within the High Coast area, I am categorising it as such.

A soft drizzle fell over our heads and Nämforsen roared next to us as we walked carefully across the wet wooden walking paths. 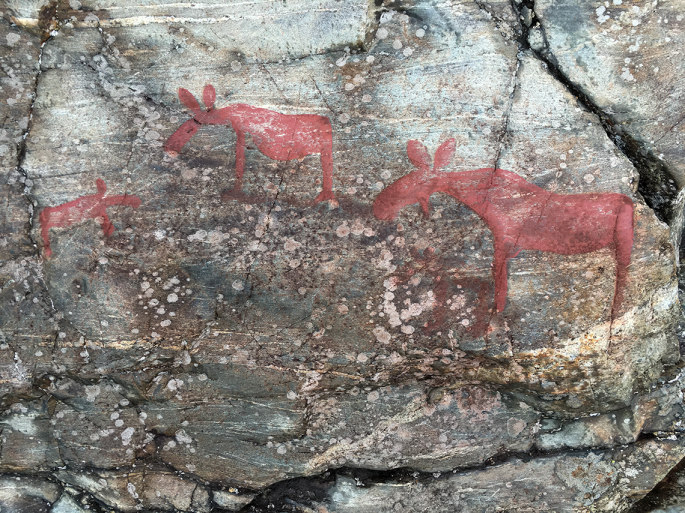 I visited this place about two years ago, when I came here to pick up my brother from a yearly recurring folk festival called Urkult. Back then I had no idea these patroglyphs existed in this place.

The landscape up here is so unbelievably beautiful I am at a loss for words. We walked around for quite some time before continuing our drive home. 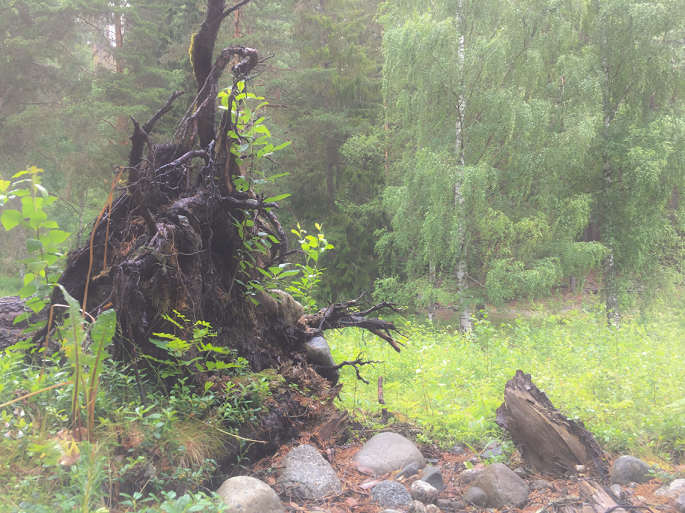 Down by the rocky shore people passing by have made these balancing rock formations. Also called meditation rocks–I think. It looked amazing, and Lilli wanted to make her own.

Would you believe that I left my camera battery charger back in Finland? I feel so silly. I realised it when Lilli and I arrived at Drottningholm Park early on Friday morning, after getting off the ferry. So ever since then I have used my camera sparingly, since it only has about half its power left. In fact, all the photos in this post are taken with my iPhone. I did however get some really nice photos taken with my camera in Stockholm, at Drottningholm, so check in on my Instagram profile if you want to have a look. 😉

When we left Näsåker, we took the so-called Tourist Route back. It ran closely along Ångermanälven (Ångerman River), and in the light rain the mist clung to the forest-dressed mountains. I kept ooh‘ing and aah‘ing as we drove, and we stopped at a couple of places so I could run out and snap a few photos. After these last photos we only made one more stop to fill up the tank and to get some drinks.

Early tomorrow morning, my brother and I will go on another road trip. We will drive across the border to Norway and go visit Trondheim for the day. It’s about a five-hour drive from here. My brother recently got his license, so I guess you could say it’s a celebration. And he asked me if I wanted to join him. Since you love taking photos so much, he said. Of course I agreed. So that was also another reason I opted to save the battery I have left for tomorrow during this trip today. I do wish I had taken some photos at the art exhibition, though, but I completely forgot.

I wish you all a lovely week ahead, and I will see you soon! With a few photos from Norway. ❤ 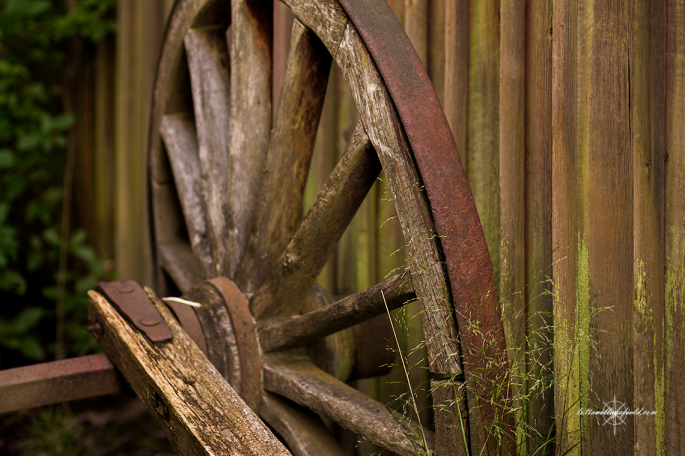 Good evening, everyone! Yesterday was truly one of those overcast days, and I kept waiting for the sky to open up with showers but it didn’t until sometime during the night. Later in the afternoon, early evening, the clouds broke apart a little. It was the loveliest light, so I grabbed my camera and went outside.

Usually I don’t go outside with my camera unless it’s early or late. And I always seem to chase that mesmerising evening sun. But what a treasure this turned out to be. In edits I found myself leaning toward different settings, since the ones I mostly use didn’t really bring out the feeling in the photos I had when I shot them. (A lot of photos in this post, by the way!)

These clouds were absolutely amazing. Every once in a while a sliver of light would come through here and there, and further away the sun sent out its soft caresses to the trees. 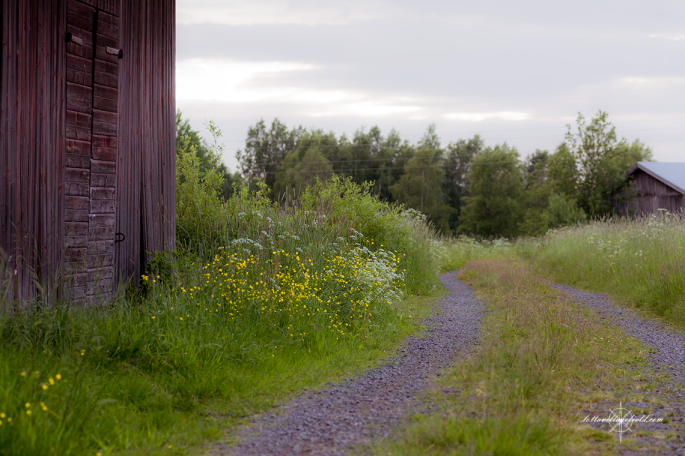 In my latest reply to the weekly photo challenge, I told you I had a particular spot in mind. And I am so grateful for the response. Thank you all so much–for the likes and the lovely comments. ❤ One of you in particular expressed a wish to see this place, so that was actually my main goal for taking this walk. When I saw that sun filter through the clouds, I thought oh, this is perfect. So thank you, Chronicles of Wonder, for inspiring me to go get that shot.

On my way there, though, I stopped (as I seem to be obsessed with lately) to capture a few closeups. Jay was out in the fields with the fertiliser, and when he was done, he came right at me. The spreader was still spinning, even if he had turned it off, so a few pebbles bounced off my shirt. I joked you threw crap on me! Good thing it isn’t actually manure. Not that he would have been sad to see me put my shirt away, considering he thinks it looks like a potato sack. Haha Last time I came here, taking care not to step too much on the moss, it was spring. The ground must have been quite chilled still, and relatively solid, because now I sunk into the clay as I got in between the buildings. It is a wonder the buildings stay upright on these shifting foundations. Although… they do tilt a little. I told Jay I wanted to rescue this wagon–what is left of it–and bring it to the garden, and he didn’t quite agree. He tells me he likes looking at it where it is. Also, after some closer thought, I wonder if it even would stay together or if the wheels are rotted. So it will stay. I must agree with him; it does look beautiful. Just as it is. Which is probably exactly why I thought of it as the perfect showcase for transition and the passing of time.

This little hidden treasure is only one of many on our farm. Even though I get immensely frustrated over all the things inside the main house left from previous generations, and we are literally swamped in the clutter, I am also so thankful so much history remains (mostly) intact on the property.

This last building is called työtupa in Finnish. I have translated it to the labour cottage. It used to be the main building (built around 1880). Jay’s grandfather grew up in this house but moved out before World War II. The house we live in, or a part of it–it has had extensions later on–was built some time in the 1920’s.

For years I have wanted to “write an article” on this farm, mostly told through photographs. Now that I am blogging, I think it is time to get started. It will take some time to gather material, but hopefully before the end of this year I will take you on a tour through the generations this place is built upon.

Until then, I would like to share two photos I took many years ago now (and actually shared here on WordPress on one of those blogs I started but never continued), from inside the työtupa.

I wish you a wonderful evening, and thank you so much for reading. ❤

Transient. In existence only briefly. When I think about things long enough, deeply enough, I feel like I suddenly descend into a rabbit hole, like Alice. My mind goes totally wild. As a result I thought that we humans are transient in the eyes of the universe. Our time here is so fleeting. How long will we be here if we think of it in hours, minutes and seconds? Poof. And our chapter will have been told.

Back at Härnösand Folk High we had a theme called Zero. During the weeks of that theme we worked in groups and made a timeline, consisting of images and text. We gathered all information and thoughts on this topic we could muster and put it up on the wall in the main corridor. I really enjoyed those weeks. If one person alone would research this topic–the timeline of our universe, from creation billions of years ago until present day–it would surely have taken forever. I certainly wouldn’t have been able to in six weeks gather information on this viewed from so many different angles. Cultures, beliefs, scientific, philosophical.

The funny thing about this timeline is that we had to scale it down and then put up our work according to when things took place. So you can imagine how one part of the wall in particular got cluttered with information. Whereas the other several billion years of wall before our time were quite bare.

I won’t illustrate such a timeline here. Instead I thought this would be the perfect opportunity to finally share Lilli’s and my walk through Sammallahdenmäki. Moss Cove Hill. A UNESCO prehistoric archeological World Heritage site practically in our little village’s backyard. According to UNESCO’s website it is “the largest, most varied and complete burial site from the Scandinavian Bronze Age, 1500-500 B.C.” So cool. One of my brothers and I once thought we wanted to be archeologists when we grew up. I still believe it must be such a completely fascinating line of work. Cuddling up to our few seconds of time here in this vast expanse of the universe. Well, you could say I got to try my archeologist hat on–Lilli, too–earlier in spring.

As a lover of nature, I ended up with more photos of the surrounding landscape than those burial cairns, but I managed to capture a couple. And we met a snake by one of these rock mounds, which made Lilli wary of stepping close to the rest of them throughout our walk. I was more afraid of disturbing the bones of whoever was buried there–that fleeting moment ago.

If you ever find yourself in Finland, in the Rauma or Lappi (the town, not the huge region up north) area, I really do recommend visiting Sammallahdenmäki. Until then, I hope you enjoy this little trek as much as Lilli and I did. 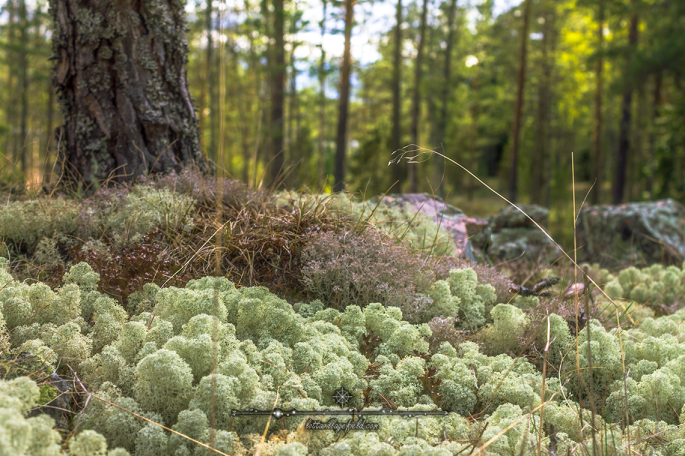 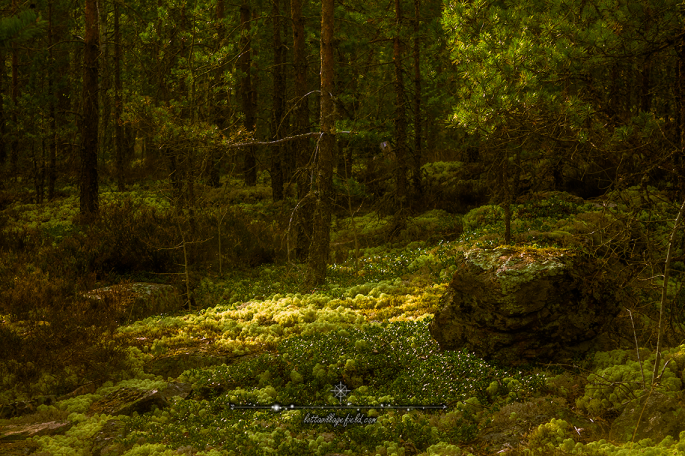 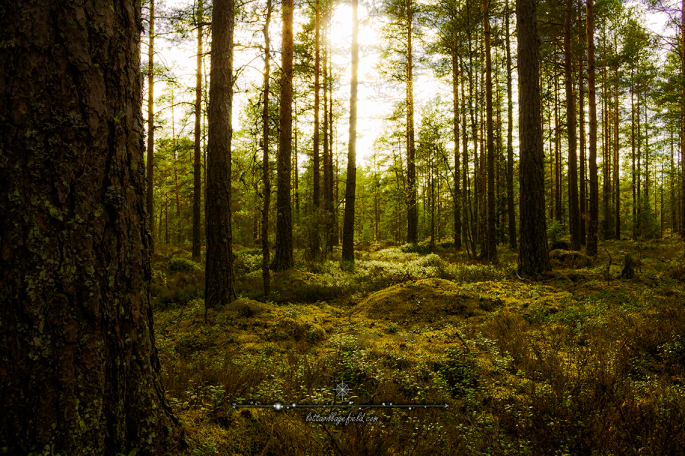