Hello my dear readers. I just sat down with a cup of coffee in front of the screen. On the other side of my window behind it a million tiny snowflakes whirl around the sway of our spruce hedge. I keep thinking about all the words I write and leave behind, erase, change, and suddenly don’t feel like using. It reminds me once again on how I at times have wondered if I should schedule my posts. My inspiration to write comes and goes, and now it has been… two weeks since my last update. So if I did write this way then I might keep all the things that fill my mind and these drafts, the photos I take that I want to share, and spread them out so you get more regular updates, even when my mind goes quiet and my motivation to shoot dwindles. What has me hesitating is that I write so very much from my feelings and impressions in the now, and it would feel like giving you Monday’s news paper with your Sunday morning coffee.

I’m hoping to throughout this coming year figure out just which way to blog is the best for me. Maybe this is a process all bloggers go through until they find their very own rhythm?

Now, however, I’m going to tell you about something very special, something I have been wanting to write about since before my trip to Sweden but was too overwhelmed to find words for.

I took this photo very late one evening earlier this month, after having waited and waited for the new battery to my brand new camera to be fully charged. After many months of slowly letting go of the prospect I will get a new camera any time soon, Jay completely blew me away when he decided to sponsor me. And not in a small way, but he got me my dream camera. The Canon 5D Mark IV. I have had it for almost a month soon but as I write this my whole body wants me to shout out loud. The first couple of days I didn’t dare to take it outside. We had such miserable weather — slush, then ice, then snow, then rain and more ice — and I was so afraid I would slip and break the camera. Silly, I know, but there you have it.

Instead I took photos inside the house, which is something I have been so bad at before. Even if I tried and had almost let go of the fact my old camera didn’t handle higher ISO all that well, which is needed in dim lighting — especially on moving targets — somehow I lost the feeling for it. But now it’s fun again. 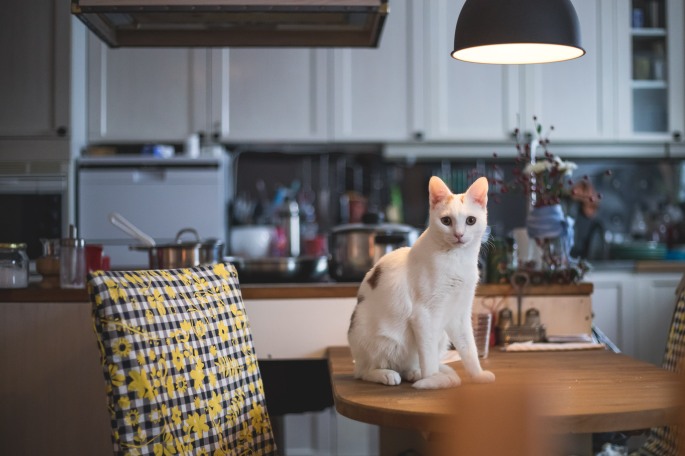 My parents bought two cats not too long ago. This is Tobi (or Tobidoo, as they call him), and his sister, who mostly ran away whenever I got close, is named Potts. Or Pottis. They weren’t too sure of Loke when we first arrived, but after he sniffed and buffed their butts all was well. Haha I have many names for Loke, too. Bubbas or Pumpas the most commonly used ones. Do you also have a million different names for your furry babies?

When I left for Sweden I wished so much I would have gotten an opportunity to capture the northern lights — now that I had this awesome camera to do it with. Even a star struck sky. However it feels like it snowed almost every single day I was there, which I of course only loved. I wanted to visit so many places during my stay in Sweden, too — places my grandparents grew up in. For many years now I have known both my mom’s biological parents are from Ångermanland, but what I didn’t know was that my dad’s mom is from around here, too. And through life’s mysterious ways, Mom and Dad ended up in Stockholm suburbs, where they met some forty years ago now.

Ramsele, where my dad’s mom was born, is maybe a two-hour drive from Ramvik at most but I have never seen it. Ljungaverk, where my mom’s biological mother is from lies a little south and inland. I mention biological since my mom was adopted. She has never met her biological mom, but we have been in contact with her biological dad since I was little. Sidensjö, where he was born, is a smaller place close to the town of Örnsköldsvik, about an hour north from Ramvik. I don’t know but I wonder if this is why I feel such a deep connection to this region? As though the very spirit and soul of these lands have left an imprint on our genes which are carried down in the intricate yet massive data sheet of our DNA. More interesting still is how my biological grandfather has Finnish ancestors. I find these things so very fascinating and I hope I will make it to these places I mentioned next time I visit my parents.

One day when the snow just kept coming down, I took Loke for a walk toward the Ramvik bay. As kids, my brothers and I would come here quite often. There is a very small beach which over the years has gotten a little more sand (by the looks of things), and the cape has served as our destination for adventures. Ramvik isn’t a very big village but it has so many beautiful houses. I had to check up what the laws said on photographing peoples’ homes, and it is allowed so long as I am shooting from a public road. Luckily no one was out with their gardening gloves. 😉 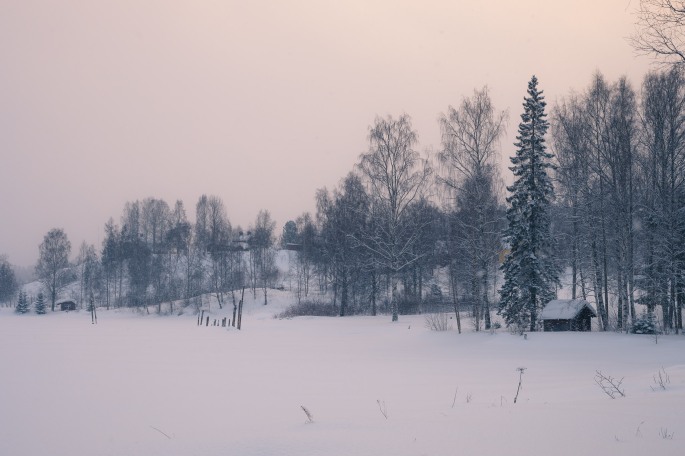 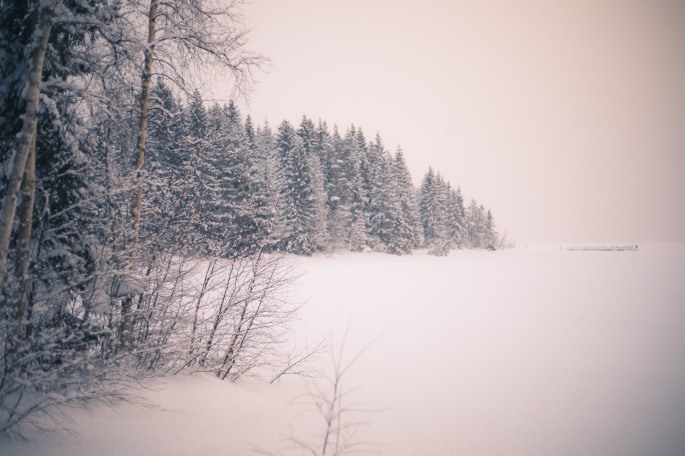 To be honest, I spent most of the two weeks in Sweden in my parents’ house. I did meet up with my friend a couple of times for coffee and dinner. It was so cozy and I have missed her so much. We are terrible at keeping in touch, but when we do meet it’s like no time has passed. I feel so blessed to have found a friend like that.

As I already wrote about in my previous post, I went on a 600 kilometer day trip with my mom and brother. We didn’t do another one like that, but I did go for a drive with my parents on the other side of Ångermanälven. The afternoon sun was so incredibly beautiful and I wish I had photos to show you the breathtaking scene that unfolded over the broken ice on Ångermanälven. I stopped the car and got out to take photos only to realise I had left the memory card on the kitchen table. This is so typical of me, but I have now bought a second memory card which I will always keep in my camera bag.

This photo was taken from underneath the High Coast Bridge. To get those photos I missed out on the day I left my memory card, I went back to the other side of the river. The clouds managed to amasse before Mom and I arrived, but I got out anyway. To stand underneath this bridge when cars and semi-trucks pass overhead is a little frightening, but I can’t help but feel humbled in the face of something so incredibly larger than myself.

We drove up to the High Coast Hotel. I wanted to see if I could walk up the mountain to get some photos, but with all the snow it was too deep to walk in. Instead I climbed up a few meter tall pile of snow created by the ploughs and the view was just as spectacular from there.

Growing up with winters far harsher than the ones we have these days I’m not a stranger to frozen fingers, but this past year even the slightest chill leaves my hands next to non-functional. Mom and Dad had a spare pair of those touch gloves, which I got to keep, but even with gloves on I have only to be out five minutes before the tips of my fingers start going numb. It doesn’t actually hurt while I’m still in the cold, but once I get inside and start warming up — the pain is excruciating. I think this is one reason behind why I have sat behind the windows in longing, watching the beauty of January from the safety of warmth. Mom said I could try a really fatty cream, which I have yet to put to the test.

Earlier this week we got the warning of an incoming snow storm for today. The winds this morning were definitely a little stronger than usual, but the snow didn’t pick up until midday. Our internet also dropped out, which was due to carrier switch. And I had to take Lilli to the doctor since she has been home all week with a terrible cough. There is no inflammation or infection in her body, though, and the fever went down earlier in the week, so she is back on the sofa and resting. 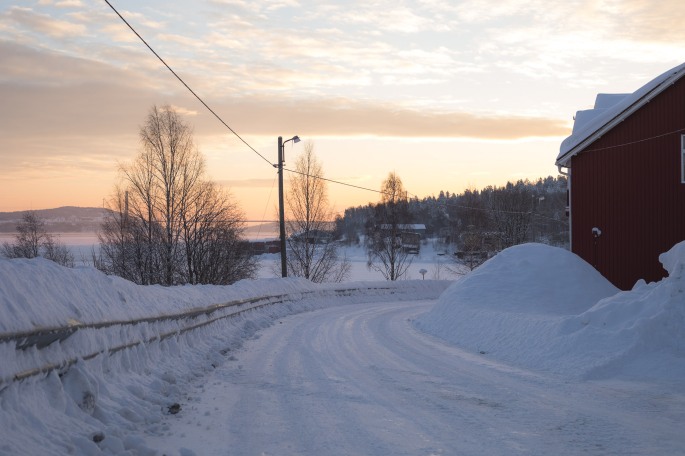 After two weeks away, I am so happy to be back home. There is much less snow here, but if this snow storm continues that might change. And I am more than content with all the photos I managed to get from the short walks I took with Loke a few times a day. Now we need to wait for his jacket to arrive with the post. I always forget something at my parents’ house after my visits. This summer I left my camera cleaning kit, and now I left Loke’s jacket. Out of all things. Luckily we only have a couple of degrees below zero.

I hope to get better at updating as this slumber begins to leave my body. Until then I will leave you with a couple more photos from one beautiful morning in Ramvik, and I wish you all a good weekend! Many hugs and much love. ❤ 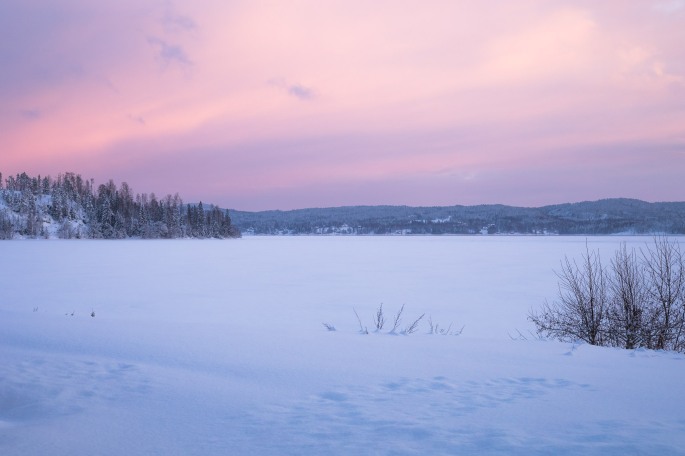